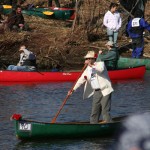 In April, hundreds of spectators gather along the banks of the Kenduskeag Stream at Six Mile Falls to watch 500 people paddle their way over treacherous rapids. The annual Kenduskeag Stream Canoe Race starts in the small town of Kenduskeag Village and ends 16.5 miles downstream in Bangor, Maine. Some racers stop just before the falls to plan their course, then with paddles — and a prayer — they approach the curling waters.

When canoes capsize, dumping paddlers into the 35⁰ F water, spectators cheer, hoot, and holler. Rescue crews in wetsuits are ready with lifelines and boats when necessary.

This time of year the water generally runs hard from spring rains and snow melt. There are no leaves on the trees and the ground is still brown and soggy. Some paddlers don costumes and decorate canoes that shine like beacons against the drab landscape.

Canoes, one after the other, tip their charges into the torrent, providing continuous entertainment for onlookers. Then along comes Zip Kellogg paddling solo through the falls STANDING UP in a canoe, decorated with flowers. He appears unflustered and not at all like he is racing. Sometimes he wears a jacket and tie, sometimes a tuxedo, and always a hat, wetsuit and life preserver (under his clothes). “Safety in early spring is critical,” he emphasizes. He routinely and successfully paddles over Six Mile Falls standing up.

“By standing up in the canoe you can see to choose the best path,” he says. “The extra long paddle is key.” It acts as the third leg of a tripod helping him balance. The canoe itself, he explains, is not tippy. It’s the human element that causes the canoe to turn over. “If you place an empty canoe in a river, it most likely will float downstream, even over the falls, without turning over.”

“How did you learn to paddle standing up in a canoe and go over the falls without falling?” I asked.

“The stream was literally in my backyard when I was growing up. As a teenager I regularly paddled the river with friends.” A friend, named Don Fletcher, taught him to paddle standing up.

Zip makes the race without hurrying in about four hours — well behind the winners who finish in roughly two hours.

“Have you ever fallen?” I asked.

“Last year I fell, but few people saw it happen. I was at the upper part of Six Mile Falls. The stream is fairly wide at the upper part. It was very congested with canoes so I went to the other side where there was more room to maneuver. I didn’t see the rock and hit it head on. It catapulted me into the water. The water was shallow, so I was able to jump back in the canoe and continue on.”

Zip has a reputation for having paddled every river and stream in Maine. When I asked him if he would confirm that he said modestly that there are some smaller streams that he has not paddled. “But I tell people the chances are if you have driven a vehicle over a bridge in Maine, I have been under it in a canoe.”

“Will you be in the race this year?” I asked. I have often watched this canoe race on television. This year I plan on watching it from the river banks of Six Mile Falls. “Yes,” he replied.

No trackback or pingback available for this article