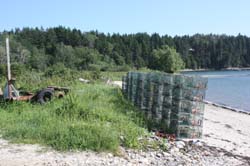 I am not a fan of snakes, but wish them no harm. The beautiful Maine Island, where we spend part of summer, is loaded with them. They are not poisonous and do not pose a threat to people other than to startle us. They eat lots of mosquitoes and provide meals for owls and hawks.

Boats are also abundant on this island. We purchased an old 14 foot aluminum “car-top” boat (an over-sized tin can), many years ago to enjoy in the Island Cove. One of my favorite activities was to sit in the bow, sipping a mug of coffee on summer mornings while Greg rowed. As the boat gently rocked in a few feet of water on the edges of the cove, I was mesmerized by the colors — the shells, barnacle covered rocks, crabs, starfish, seaweed, and sea glass. Sometimes we’d find beds of mussels and go back later in the day to pick a delightful evening meal.

We stored the boat upside down on the beach grass, among lobster traps, ropes, buoys, and snakes. At the beginning and ends of our stay on the Island we walked into the beach grass to turn the boat right side up and carry it to the water. Greg went first to pick up the bow. With the hair on the back of my neck standing up and my eyes darting around wildly for any sign of a slither, I lifted the stern. It was the heavier end but had a lower risk of snake sightings.

As time passed, more snakes found the beached boat a comfy place to hang out. One time, when we placed the boat in the water, five snakes of varying colors squiggled out from under the seats and over the side. Shocked by the cold salt water they wriggled and squirmed, trying to swim to shore. I stood, also shocked, at a distance, imploring Greg to save them, which he did with the aid of an oar.

A few years later, Greg bought a small motor for the boat, and the quiet morning rides disappeared. Instead, I took my coffee in a plastic mug with a secure top as we explored the bay at a faster pace, seal watching.

One day as we cruised along the bay, Greg saw a little head poke out of a fishing-gear hole drilled in the hollow gunwale of the boat. When he realized it was the head of a small snake, he kept mum, hoping the creature would stay put, and fearing I would jump out of the boat if I saw the snake was along for the ride.

On another occasion, when Greg took the boat in town to pick up his friend, Steve, a snake accompanied them. This time Greg showed it to Steve, who was also not thrilled. Steve quickly named the boat, The Snake Boat, and when he returned to the mainland later that day, took the commercial ferry.

I seldom ride in the Snake Boat anymore because we acquired a larger “tin can” with a slightly larger motor that sits on a boat trailer instead of the ground. Occasionally, we take the Snake Boat for a row, checking first for unwanted passengers. Then I take my coffee in a pottery mug while Greg rows in the shallows.

*This was first published in the Maine Warmers’ e-Newsletter, August 2, 2010.