Teens in a Jeep 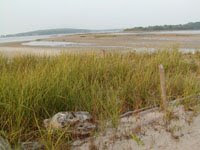 A sandbar connects our Maine island to a little island and at low tide is enjoyed by walkers, waders, and swimmers. When the tide is high about 6 feet of salt water covers the sandbar. It is affectionately referred to as “the bar” by islanders but pronounced “bah.” Years ago, when the little island was populated, a milkman drove across the sandbah at low tide in a truck to deliver fresh milk, bread, and donuts to the residents.

The mile-long stretch between the two islands is sandy, muddy, rocky, and marshy. It has curves and undulations that shift over time, like children who change each year but never lose their general character. When our kids were small they played in the shallow gentle waves at low tide finding sand dollars, crayfish, and hermit crabs.

In the evenings, as we sit around the suppah table we share stories of each day’s island adventures — and misadventures. One night this summer, the table conversation was started by my husband, saying how easy it was to put the boat in the water on the beach with our newly acquired 1998 4-wheel drive “beater” truck. Our son, Brian, now age 30, asked, “Did I ever tell you about the time Randy got a 4-wheel drive jeep stuck on the sandbah?”

I was happy not to have heard this story when he was a teenager and have changed the names of the participants to protect the guilty.

A mixture of island teens — residents and summer kids — would play all day on the beaches, meet after suppah at the general store, have an ice-cream, then walk or bicycle to a beach of their choice to hang out until curfew.

One summer, Jessica showed up sporting a 4-wheel drive jeep in better condition than most Island cahs. It was purchased at an extraordinarily low price by her parents just a few days prior to their summer vacation. The third night after her arrival Ben and Randy convinced Jessica to let them drive the jeep across the bah. As soon as she said yes the kids piled in — Randy at the wheel and Jessica the last one on board — and off to the sandbah road they rushed. Down the dirt road to the beach they bounced and then out onto the bah. As they approached the middle, the jeep suddenly sunk up to its frame in gray clammy mud. Amazingly the 4-wheel drive feature did nothin’ to free it. They got out and tugged. The tide inched its way up the sand. They collected more friends to help tug. The water now was an inch high all around the jeep. Frantically, they borrowed motor boats and long ropes and tugged more. No matter what they tried the jeep would not budge. From the shore they watched in pain as the tide swallowed the jeep.

Jessica finally had to go home and wake her father from a sound sleep. “Dad,” she said softly, “the jeep is stuck on the sandbarrrrr.”

“What time is it?” he asked groggily.

“Why didn’t you wait until morning to tell me?”

In daylight some very helpful Islanders with just the right boats, ropes, and experience hauled the jeep from the mud. Jessica walked to the evening gatherings the rest of the summer.