Regarding The Polar Bear Plunge

The Maine island where we spend part of our summers is a place where kids are free to roam, ride bicycles, climb trees, run about in boats, rebel and of course get into trouble. It’s better than Disneyland.

Years ago, when the summer population on the island was smaller than today, everyone laughed at or tolerated the pranks kids pulled. As the population grew, Islanders saw the need for more constructive activities for all ages. They turned their attention to raising money to build a recreation center. Today that center, mostly funded by private donations, is a central meeting place with a gym, swimming pool, meeting rooms, and a large kitchen.

A recent fundraising activity included a Polar Bear Plunge with several volunteers jumping into the Atlantic Ocean in February. When asked if I would donate a Polar Bear to the person who raised the most money for the event, I had mixed feelings. I was told by a cardiologist that people who jump into cold water in the middle of winter put their hearts at risk. Atrial defibrillation is an abnormal beating of the heart that can occur in young people whose systems are shocked by the frigid temperature of the ocean.

I wanted to support the Recreation Center and the people who work so hard to maintain it, but I did not want to encourage risky behavior. In appreciation for the people on the island and for all of the great times and stories, I decided that Maine Warmers should give a Polar Bear to each person who took the plunge. Then if they needed medical care afterwards, at least they would have a Maine Warmer to help them get well. 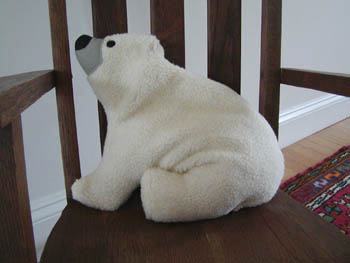