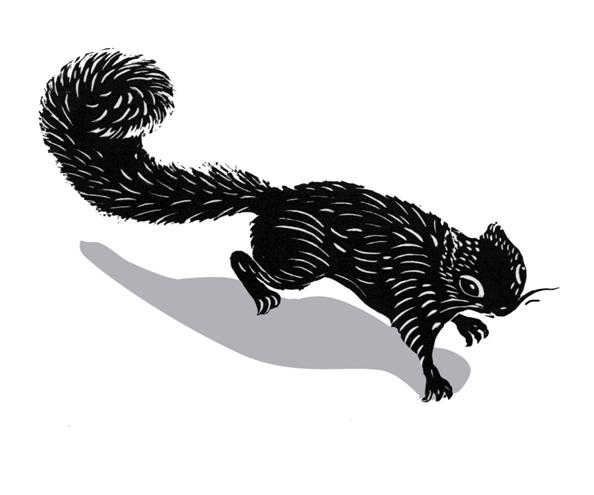 One March, a family of red squirrels moved in with us. We heard them running up the walls and between the floors, waking us at all hours of the night. I could picture them, their nests between the beams, baby squirrels galore, and their eventual overrun of our house.

Red squirrels in Maine have a bad, but well deserved, reputation. With their very sharp teeth they chew right through siding on people’s houses. My concern was that one would chew through the walls of our house where we had two young children.

Several times we looked for an opening where they were entering the house but could not find one. Our neighbor, Ruth, the previous owner of our house, recommended trapping them in a Have-a-Heart trap. When she lived in our house she used to capture them, drive ten miles away, and let them out. She sent me off to the local hardware store to see her nephew, Dick, who lent out the store’s Have-a-Heart trap.

As directed, I baited the trap with peanut butter and Saltines and placed it in the cellar. For two weeks the squirrels never nibbled the bait! By that time they had probably gathered enough food from outside that they weren’t tempted. Or they were wise to the trap.

I went back to the hardware store and asked Dick about poisoning them. He said poison wouldn’t kill them — just make them terribly sick. I reasoned that if they got sick by eating something in the house they might move out. I bought the D-Con and placed it in a narrow cupboard (too small for the trap) behind the bath. Within minutes they were at the D-Con. Then I listened in agony as they screeched and writhed in pain. I walked back to see Ruth next door. This lady, who was like a grandmother to our children, surprised me when she said, “Get Greg to shoot them!”

My husband, Greg, did not want to shoot them. He happened to be the Police Chief in town, and when I spoke with him about shooting the squirrels he launched into a lecture about how guns are so harmful and destructive. Then he showed me how to use a hand gun and a shot gun. He taught me all the safety rules and talked about the laws regarding the use of deadly force. Although this was more information than I asked for, it served me well.

I wished the squirrels would move out, and I did not relish the thought of taking their lives. The relentless chewing and noise eventually annoyed my husband enough so he reluctantly agreed to shoot them. First, he talked with the neighbors and explained why they might hear gunshots. Then, with our children away for the day, we proceeded out into the yard.

Red squirrels seem to understand danger, and they fled to the tops of the huge maple and spruce trees that surrounded our country home. I helped spot them and Greg shot five of them.

For a few weeks we enjoyed their absence. Then at 4 AM one Saturday, while my husband was away on business, I was awakened by scurrying noises. As I lied in bed listening to the familiar sounds, I grew angrier and angrier.

I threw on some clothes, tip-toed downstairs, careful not to wake the children, and grabbed the shotgun out of the secret closet. I slipped the shells into my pocket, brewed some coffee, and contemplated how to coax the bugger out of the house. I considered shooting it through the walls. Instead, I took a broom and gently tapped the end of it on the ceiling under the noise. In a moment, the squirrel was in the tree just outside looking at me through the window.

I grabbed the shotgun, went outside, and loaded it. The squirrel ran to the tippy top of a forty foot Blue Spruce. He knew I was gunnin’ for him. I considered blasting the top of the tree but thought I better look around first to see if anyone happened to be out and about at 5 AM.

Sure enough, Ruth was outside sweeping her driveway. I called to her and she looked at me rather curiously. I explained about the squirrel and asked if she would help me spot him. Enthusiastically she joined the hunt.

We stood at the base of the spruce tree, looking at the squirrel, waiting and talking. After ten minutes I said, “Ruth, I don’t think he’ll come down out of that tree while we are standing here. You might as well go back home.”

We both backed away and I leveled the shotgun. The bang was much louder than I expected. The squirrel dropped dead to the ground.

“You got him!” she shouted.

Our neighbor, Jane, later told us she heard the shot and said, “What was that?” Her husband, Bill, looked out the window and replied, “Well, I see Betsy and Ruth doubled up laughing and Betsy is holding a shotgun.”

My husband was quite surprised when he returned later that day. Dick at the hardware stored laughed, and the squirrels never returned. I have not touched a firearm nor contemplated shooting an animal since that day.