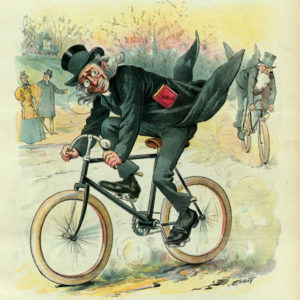 In this Public Domain painting by Samuel Ehrhart people think the minister is hurrying to get to church or work when he is actually racing another minister!

Did you know that Friday, May 20, 2016 is National Bike to Work Day? Here in Scarborough, a mostly rural suburb of Portland, Maine, we see lots of bikers on the road for recreation, but not as many riding to work.  On May 20th I will be sure to pay attention to bikers who look like they might be heading to work.  A messenger bag in tow might be a clue.

NBWD (National Bike to Work Day) began in 1956 and today its observance is part of National Bike Month, which helps to raise awareness of commuting without polluting. “With increased interest in healthy, sustainable and economic transportation options, it’s not surprising that, from 2000 to 2013, the number of bicycle commuters in the U.S. grew by more than 62 percent.” http://bikeleague.org/content/bike-month-dates-events-0

If you’ve ever traveled to the Netherlands, it’s no surprise that the Dutch top the list worldwide for biking to work.  The “other” Portland (Oregon) is the top city in the U.S.  Check out this article to see if your city made the Top 9 Best Cities for Biking to Work. No matter where you live, if you’re considering commuting by bike to work, do a little homework before you hit the roads.  Here’s a great resource with some Ride Safety Tips.

A Maine Warmers microwave heating pad might come in handy after a bike commute.  The soothing heat will ease muscle spasms and aches.  The Extra Long Neck Warmer not only wraps around shoulders but its oblong shape fits nicely along sore hamstrings, quadriceps and calf muscles.

We give away a Maine Warmer once a month! When you subscribe to our e-Newsletter you are automatically in the drawings. Subscribe Here!

Made in the USA

Hearty Breakfast Muffins — Gluten-freeMany food stops in Maine do not have gluten-free options, so this breakfast muffin caught...

Beef Bourguignon – Gluten-freeI recently cleaned out my recipe box, and though I haven’t made it for decades,... 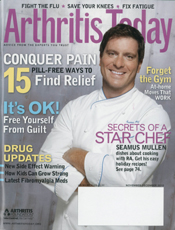