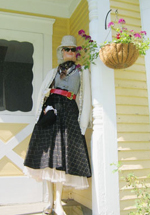 Maxine on her way to a social event

Maxine became quite popular during the summer, appearing at several Island locations sporting the outfits from the original wardrobe and some that had been donated. According to Annie, “Maxine mailed letters and bills at the post office, spent many days in the library hanging out, even went to the slumber party there when a new Harry Potter book was released (although she had to sleep in the closet because one of the slumber party mates got freaked out by her).”

Islanders looked for her like they would look for a celebrity. “Where’s Maxine?” people would frequently call out when they saw Annie driving by (Island speed limit 25 mph). Annie would reply, “I think she had to mail a letter!”

Maxine attended a family swim at the pool. She was also seen wearing her “poodle skirt with a cardigan over her shoulders” and holding a glass of wine on several Island porches that summer. She attended a play and rode a bike at the local bike shop. She was in the 4th of July Parade, was invited to many birthday parties, and was even a June bride!

She attended a fancy Island dance dressed in an elegant black silky dress. Her plastic body had a rod that joined her upper part to the lower so she could be separated at the waist. At the dance, Annie and Joanne removed her lower body and one gentleman slipped his arm under Maxine’s skirt and held onto the rod attached to her upper torso. Then he elegantly waltzed her around the dance floor.

Maxine, when she wasn’t gallivanting around the Island, sometimes lived at Joanne’s house and sometimes at Annie’s. She was often left in different rooms, closets, and hallways. At Joanne’s house she often stayed just outside her teenage nephew’s bedroom. He locked his door at night whenever Maxine was there.

Eventually, family members began to resent Maxine’s presence — especially when they came unexpectedly face to face with her. Even Annie and Joanne found themselves uttering expletives now and then. ” … Oh, Maxine! You startled me!”

One day, while Annie ran some errands off Island, she left Maxine out in her front yard to enjoy the sunshine and passers-by. Annie and her family lived in a lovely two story house near the golf course where by many Islanders passed — on foot, bicycle, or car — on their way to the ferry boat landing. Maxine looked lovely next to the attractive gardens and front porch.

When a sudden turn in the weather brought the threat of a thunderstorm, Annie phoned her teenage son to ask him to bring Maxine inside. A few hours later, when Annie drove into the yard, she was mortified to see Maxine standing on her front porch, “buck naked.”

At the end of the summer, all the effort of the raffle was worth it. A nine year-old girl who loved to play dress-up won Maxine’s clothing! “The final wardrobe [consisting of the 1940s clothes and some donated accessories] filled a trunk and 3 hand-painted hard cardboard suitcases right from my attic,” said Annie.

Maxine was not a part of the raffle and lives on at Joanne’s family Island cottage, still tormenting the younger folk and occasionally startling them all. Now and then she appears at a gathering, wearing a donated outfit appropriate for the occasion.