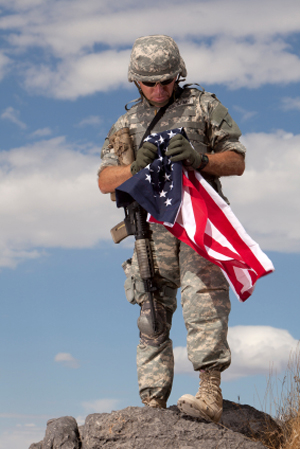 Army Private 1st Class Alexander Joyce was returning from Afghanistan, in October of 2010, for a two week leave of duty. His last flight into Portland, Maine was on a commercial jet. He was sitting in coach class several rows back wearing his uniform — Army camouflage. Shortly into the trip, a flight attendant spoke with him, explaining there was an empty seat in First Class, and the flight crew would like him to have that seat.

Alex, in his mild, unassuming way, thanked her, and said he was fine sitting where he was. A Vietnam Veteran, in a nearby seat, heard the conversation, stood up, and said he wasn’t going to take “No” for an answer. A woman, sitting within earshot of the conversation, chimed in, thanking Alex for his service, saying she didn’t want to take “No” for an answer either. Then several other people on board joined in, encouraging Alex to take the First Class seat.

Amazed and honored at the show of support, Alex decided to take the seat in First Class. As he walked to the front of the plane, the passengers cheered and clapped.

When the plane arrived at the Portland, Maine airport, his mother, father, brother, and girlfriend greeted him at the gate (with special gate passes, of course). After hugs and hellos, they stepped onto the escalator to go to the ground floor and baggage area where several other family members and friends stood cheering with a large “Welcome Home Alex” banner. Several people in the airport who saw what was happening joined in, cheering and welcoming Alex home.

Alex’s dad told me this story then added, “By the way, a few days before Christmas last year, Alex was returning to Portland from Alabama for a few days before he was deployed to Afghanistan. Due to weather delays, he missed a connecting flight by five minutes. As Alex talked with the airline official to see if he could find another flight home for the holiday, it became clear that there would not be any available seats on a flight to Maine until after Christmas — the time Alex would have to return to Alabama to leave the country. A man, standing in the long line, heard the conversation and gave his seat to Alex.

On Veteran’s Day, we honor those men and women who have put their lives on the line to protect the people in this country. We, at Maine Warmers, extend our sincere appreciation and thanks to all those serving in the military today, to those who have served, and to those whose lives were lost.

No trackback or pingback available for this article