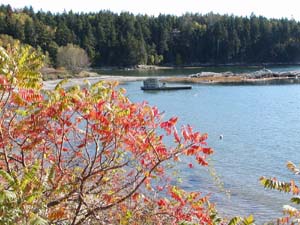 Our summer Island escape is a magical place where beautiful vistas appear around every corner. It’s a place where neighbors watch out for each other and people drop in to say hello and have a cup of coffee or tea. On a neighbor’s garage is a hand lettered sign that says, “If you don’t have 20 minutes, don’t stop!”
In some ways people on the Island are protected. Anyone who comes to the Island has to take a boat or airplane, and is visible upon arrival. The boat crews on the commercial ferries know the locals who commute to town for work or to gather supplies in town.

When a couple of 11 and 12-year-olds from the mainland decided to take a little trip on the commercial ferry to the Island without their parents’ permission, a neighbor was there to take them under her wing, call their parents, and assure them the children would be back on the next boat a few hours later.

On the Fourth of July, families and Island organizations decorate Island beaters (cars and trucks that are well rusted, or soon will be from the salt air), kids decorate bicycles with crepe paper, and summer “clown school” graduates parade the length of the Island, throwing candy, hooting and hollering along with the vocal spectators. Everyone ends up at a picnic, where one can buy hot dogs, hamburgers, lobster rolls, whoopee pies, and other homemade desserts. Games follow lunch — three-legged and burlap bag races among others. The most popular game is the greased pole with dollar bills stuck to the wooden bark-free sides and going up in value as they reach the very top of the pole. It’s a time to let go and celebrate something much larger than ourselves.

There’s an historical society museum where you can learn about the stone sloop industry of the 1800s. Men hauled quarried granite in sailing vessels called sloops, from Maine to Boston, New York City, and beyond, used to build hotels and sky scrapers. You can see photos of fishermen and lobstermen earning a living in one of the toughest and most dangerous of jobs. You can see photos of those who lost their lives at sea.

When our friend, Tom, was 15 he worked as the “stern man” on a lobster boat. One day his foot caught in the rope, and he was about to go over the stern with the traps when the lobsterman piloting the boat saw him and cut the engine. He said that if he’d gone overboard he would have been dead,  probably hitting his head on the way over. Without a sharp knife, he’d have no way to untangle his foot from the weighted rope. The watchful eye of the lobsterman saved his life.

This Island community isn’t as idyllic as it may sound. At one time there was a feud between two people, one from each end of the Island. It split the Island in two — the East and West ends. People still talk and even joke about it today. In any community there are disagreements and transgressions. But Islanders have to sit with each other on the ferry going back and forth to the mainland each day. They run into each other at the one small Island grocery store, and they still depend on each other.

Two couples who had been good friends and neighbors for years had a dispute over land and afterwards never spoke to each other again — on the boat, in the store, or on the path to the beach. Later in life, one of them developed Alzheimer’s. The estranged neighbor found him wandering on a path one day in the woods and feared for his safety. Putting their differences aside, he knocked on the man’s door and alerted the wife, who brought her wandering husband safely home.

There are island communities all across the US, like our small Maine Island, where people watch out for and protect each other. They gather to share celebrations, special events, history, stories, funerals, and homemade meals. They get to know their neighbors, understand their challenges, and live side by side in peace, despite their differences.
Photo by Betsy Hanscom