Alice Mead and the Children of Kosovo 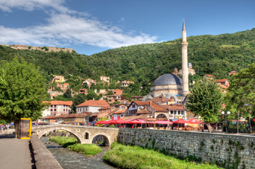 When Alice Mead sees people struggling, especially children, she does what she can to make life better for them. She’s an activist, an artist, a writer and the author of several books for young people, including some that deal with difficult subject matter, in GIRL OF KOSOVO, and SOLDIER MOM. Her book, JUNEBUG, about the struggle of children who are pressured to join gangs in the projects of Connecticut, was featured on Oprah’s best books for kids. It’s an eye-opening story that reveals the hopelessness that some children have to face every day. She is also the author of a cute picture book, BILLY AND EMMA, which I read to my grandchildren.

Alice Mead was the woman who was responsible for bringing many children from war-torn Kosovo into Maine to keep them from being drafted into the military or into factional militias, where their lives would certainly be in danger. My friend, Connie Smith, who sheltered three teenagers from Kosovo during the late 1990’s and early part of the 21stcentury, was the subject of an e-newsletter story in 2008.

Hearing Connie speak of Alice Mead and following the lives of her teenagers from Kosovo, I always wanted to meet Alice. Then one day last April, in downtown Portland, I helped a woman in a wheelchair navigate into an elevator and disembark on the 2nd floor. As it turned out we were both attending a Woman’s Fund Leadership series. I introduced myself and was pleasantly surprised when she said her name was “Alice James – formerly Alice Mead.”

I often wondered what motivated Alice to risk her own life to help these young people escape the conflict between the Albanians and Serbs in Kosovo. I was happy to have the opportunity to ask her about how she became involved.

Her interest in this part of the world started many years earlier when she studied Russian. It heightened when she read about the breakup of Yugoslavia, but could not find follow-up information in the newspapers about the conflict. Curiosity and research led her to national organizations that were also trying to find information about the undocumented population of Kosovo Albanians.

“One night I literally woke up and felt a tap on the shoulder. It was a ‘you can and must do this,’ tap,” she said. She traveled to Kosovo, at great personla risk, where she gained valuable information that helped expose torture, killing, and exploitation of young people. See her documentaries on YouTube.

In Maine, she found families who were willing to host the kids she helped to escape, and schools that were willing to educate them. “It was easy to get them out of Kosovo,” explained Alice. “It was much harder to bring them into the US.” Finding a family to keep a teenage student was challenging. Because these young people had been denied an education for so many years in their homeland, it was difficult for the schools to educate them. Eventually, US laws changed to require students to pay out-of-town tuition of $10 – $12,000 per year, which most could not afford. Some private schools in Maine began to generously sponsor these foreign students and waived the tuition for them.

The Kosovo teenagers missed their families and couldn’t even return for a summer visit during the years of conflict. Adjusting to cultural differences, diets, and the fact that they had regular teenage growing pains added to the challenges for host families. “Alice tried to rally these kids around her and keep them in touch with each other,” explained Connie Smith. “Some of them had relatives living in the US and visits were arranged when possible.”

Because she has been involved with many issues and projects to help kids, I asked Alice how she deals with difficult information involving children. She replied thoughtfully, “I don’t always deal with it well.” It dawned on me then that Alice doesn’t turn her head away from trouble, but deals with it by taking action. “I did not feel free myself if I did not stretch my own freedom as an American citizen,” she explains. “I have never for one second regretted the fourteen years I put into education and human rights development in the countries of former communist Eastern Europe.”

I admire her bravery, compassion, and ability to take action for the benefit of children. After talking with her, reading her books, and seeing her smile, I also admire the fact that, after all she has seen and lived through, she is still very much a child at heart.