Another Member of the Atlantic Club 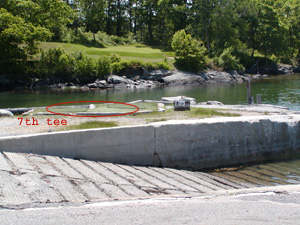 Cars are frequent topics of conversation on the island because we all drive beaters — motor vehicles that won’t pass inspection (not required by law on the island). Most still have enough miles left on them to last several summers and provide numerous tales of woe. A car story I hadn’t heard emerged last summer as we dined with friends one evening.

Our dear friend John was operating a 1992 Chevy S-10 that did not have an emergency brake or first gear. On Friday of Memorial Day week end a few years ago, using this truck, he had launched a new row boat and was preparing to load the old one onto the bed of his Chevy. He had backed the truck down the boat ramp, near the Stone Pier, on this lovely late afternoon and left it in reverse gear to keep it from rolling.

The Stone Pier still remains one of the busiest places on the island. Fisherman and commuters who have boat moorings use the Stone Pier daily. A ferry boat pulls up to a float where passengers depart and arrive from the mainland. Islanders, meeting friends and relatives, and kids just wanting to see some “action,” show up at the Stone Pier in sync with the boat schedule. In the bay, lobster and pleasure boats bob up and down and point into the wind. On the left side of the boat ramp sits the 7th tee of a golf course. It’s a Par 3 hole and an 80 to 90 yard shot from the tee to the green, which sits across a small cove.

As John stopped to talk with Lindy (the ferry boat captain) and Leon (a local resident) on the pier, the truck, suddenly and mysteriously “rolled backwards, started, and shot into the cove,” disappearing into about eight feet of ocean water.

It’s hard to describe how cold the ocean water in Maine is in May. The northward flowing mild current of the Gulf Stream misses the Maine coast, and Arctic-like ocean waters crash onto our beaches and rocky shores. My theory is that most Islanders don’t learn to swim because the Gulf of Maine water is too darn cold. When water temperatures are between 40 & 50 degrees F., a person immersed in water without any protection, can lose consciousness in 30 to 60 minutes. That’s probably why boats are kept in great condition – – unlike cars. On Memorial Day weekend the ocean temperature around the island is between 45 and 50 degrees.

After the initial shock and discussion of how to get the truck out of the water and avoid problems with the DEP, Leon jumped into his truck and drove home to get a long rope while John contemplated having to go into the water to do what had to be done. John is a self-proclaimed bad swimmer.

When Leon returned and fed the long rope down the ramp, Ruthy, an island lady who seems to know everything that goes on around the island, showed up on the 7th tee.

“What’s going on, John?” she asked, eyeing the rope going from Leon’s truck to the water.

“Something must be going on! What’s that rope?”

The truck was totally invisible — the water innocently reflecting blue sky, hiding the captive truck, and keeping their secret. Off she went to finish her golf game.

John had to swim out to the truck, and in several uncomfortable dives open the doors, open the windows, thread the rope through the windows, and tie a knot. He did a great rendition of Lloyd Bridges in Sea Hunt showing us how he swam into the cab of the truck. He was not able to get down far enough in the cab to depress the clutch, but after several tries was able to budge the gear shift out of reverse and into neutral.

Lindy had to leave to pick up a bumper crop of holiday weekend travelers in the ferry boat which would return to the island in 30 minutes.

Leon started pulling the Chevy along until it caught on a rock on the bottom of the cove. John enlisted the help of an idle teenager and had to go back into the water to maneuver the truck over the rock. The air in the tires helped to elevate it just enough so John and the teenager could stand on the roof and bounce up and down until it cleared the rock. The ocean finally gave up the drowned truck just before the ferry boat pulled up to the float at the Stone Pier.

John returned home to his wife Annie who was wondering what was taking him so long. (I am sure he used his Maine Warmer right then). Now a member of the infamous Atlantic Club,* he drives a decent truck with an emergency brake and all gears.

*The Atlantic Club is a group of people who, usually through circumstances within their control, have had a motor vehicle end up in the Atlantic Ocean, sometimes with them inside. Once the vehicle is immersed in salt water it is unsalvageable and is hauled off to the crusher.